When a ceiling fan has just three blades, each blade has to work relatively hard to move an adequate amount of air around a room to have a cooling effect. This also means that each blade needs to be set at a relatively steep pitch of 15 degrees or more, and the blades will probably need to spin quite fast too, which in turn will put a heavier load on the motor. This method can work, of course, but it isn’t really the most efficient way to cool a room.

Rather than having just a few blades on a ceiling fan, a better way is to have many blades, as in the typical and iconic American windmill. This design can rotate much slower than the average ceiling fan, thereby putting a lighter load on the motor and saving money too. Each blade of a multi-blade fan, where there may be upwards of 15 blades, doesn’t have to work nearly as hard as when there are only three blades; they each carry part of the work load and can therefore disperse air more easily.

When you have many blades on a ceiling fan the pitch of each blade can be flatter than in a three-blade fan, as each blade only needs to move a relatively small volume of air. This, coupled with the slower rotation of the fan, results in a quieter mechanism when in operation that can move air, compared to the average ceiling fan.

It should be remembered that ceiling fans do not actually lower the air temperatures, unlike air conditioning units. What they do is create a kind of wind chill factor that makes the hot air in a room feel much cooler. The effect is to make hot conditions much more manageable and comfortable. Also, a ceiling fan is much more affordable to run that an air conditioning unit. They are cheaper to replace too, and maintenance repairs are usually cheaper and simpler as well. 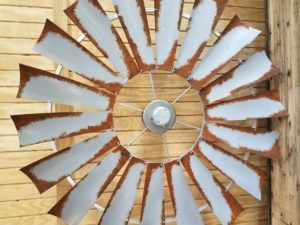 A ceiling fan with many blades, such as the Windmill Ceiling Fan, is more efficient at creating a wind chill effect in a room than a more conventional ceiling fan. When this fan is used in conjunction with air conditioning, it will enable you to raise your air conditioning thermostat and still maintain an acceptable cooling effect. This alone could save you several hundred dollars over the course of a year.

Ceiling fan decisions are more difficult than you probably thought in the past. We can all have cooler environments, more affordable energy costs, safer homes and barns, and beautiful focal points in our home’s design with The Windmill Ceiling Fan.  CLICK HERE to view the client gallery.